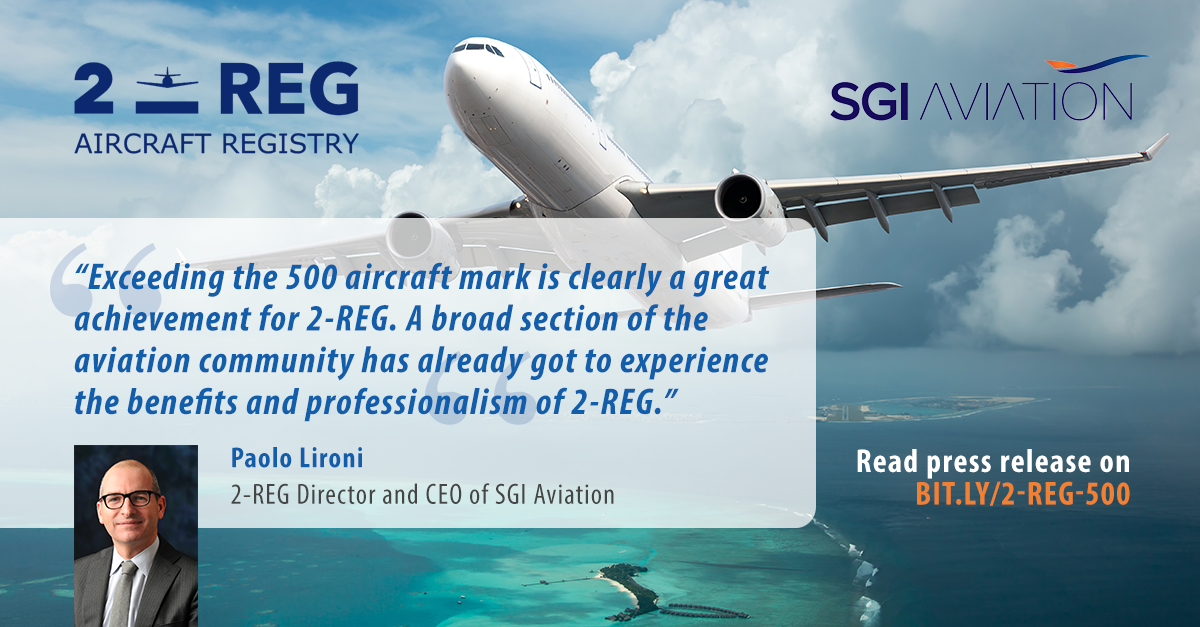 La Villiaze, Guernsey – May 7, 2019 – The States of Guernsey Aircraft Registry (“2-REG”) has registered its 500thaircraft, a Boeing 737-800, reaching a key milestone in its rapid growth since the registry’s formation in December 2013.

“Exceeding the 500 aircraft mark is clearly a great achievement for 2-REG,” said 2-REG Director Paolo Lironi. “A broad section of the aviation community has already got to experience the benefits and professionalism of 2-REG, which today provides a world-class commercial approach with 24/7 service, and much-needed availability and flexibility, delivering clear value to a global and diverse base of customers.”

2-REG is an ICAO-based register that is well recognized around the world for accommodating all aircraft categories, including commercial aircraft, business jets, helicopters, and general aviation. In 2015, 2-REG began to issue Aircraft Operating Certificates (“AOCs”), of which six have been issued thus far.

2-REG has built its reputation by being extremely responsive and customer-focused, offering its worldwide coverage coupled with competitive fees, making it the most successful registry within the aircraft leasing sector.

Lironi concluded that “the 2-REG team would like to thank all our registered customers, and in particular, our initial customers, who first believed in 2-REG and understood its real value for their businesses.”

This milestone is only the beginning of a 30-year long journey. 2-REG plans to further increase its visibility by exhibiting at EBACE on May 21-23, 2019 in Geneva (www.ebace.aero/2019), and is a proud sponsor of the 47thGuernsey Air Rally on June 7-9, 2019 (www.guernseyaeroclub.com/air-rally).

More information on the registry can be found on www.2-REG.com.

2-REG Aircraft Registry started its operations in December 2013. Based in the States of Guernsey, a British Crown Dependency, is independent from the United Kingdom and outside the European Union. 2-REG is an ICAO based register and outside the EASA and FAA. 2-REG validates TCDS issued by EASA, FAA, CAAC and ANAC. All aircraft leaving the 2-REG successfully exported to a next authority without any issues.

For media inquiries, please send an e-mail to pr@seaburycapital.com or call: