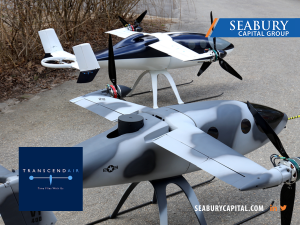 Patrick Henry Dowling, Senior Managing Director at Seabury Capital Management, commented: “Transcend did an excellent job in presenting an update on their progress to date at the event. We are proud and excited to represent Transcend in managing their current capital raise in which we also invest.”

A group of experienced aerospace execs, engineers, and entrepreneurs who have designed a tiltwing VTOL aircraft which will grow to dominate the VIP transport helicopter segment by being faster, cheaper and safer, and which will enable our new city-center to city-center Aerial Regional Transport (ART) service. Since 2009, Transcend has built and flown 16 prototype VTOL aircraft. www.transcend.aero

For media inquiries, please send an e-mail to pr@seaburycapital.com or call: